The VUB – Vrije Universiteit Brussel,
Dutch-speaking sister of the Université Libre de Bruxelles,
on the occasion of the granting of the title of

devoted the 29 November 2017 day to refugee issues
and more specifically to young people among them,
because university education institutions also have a duty to train and welcome them.

Speaking on this occasion,
Dr. Gerlinda Swillen
expresses an Appeal of the children born during the Second World War 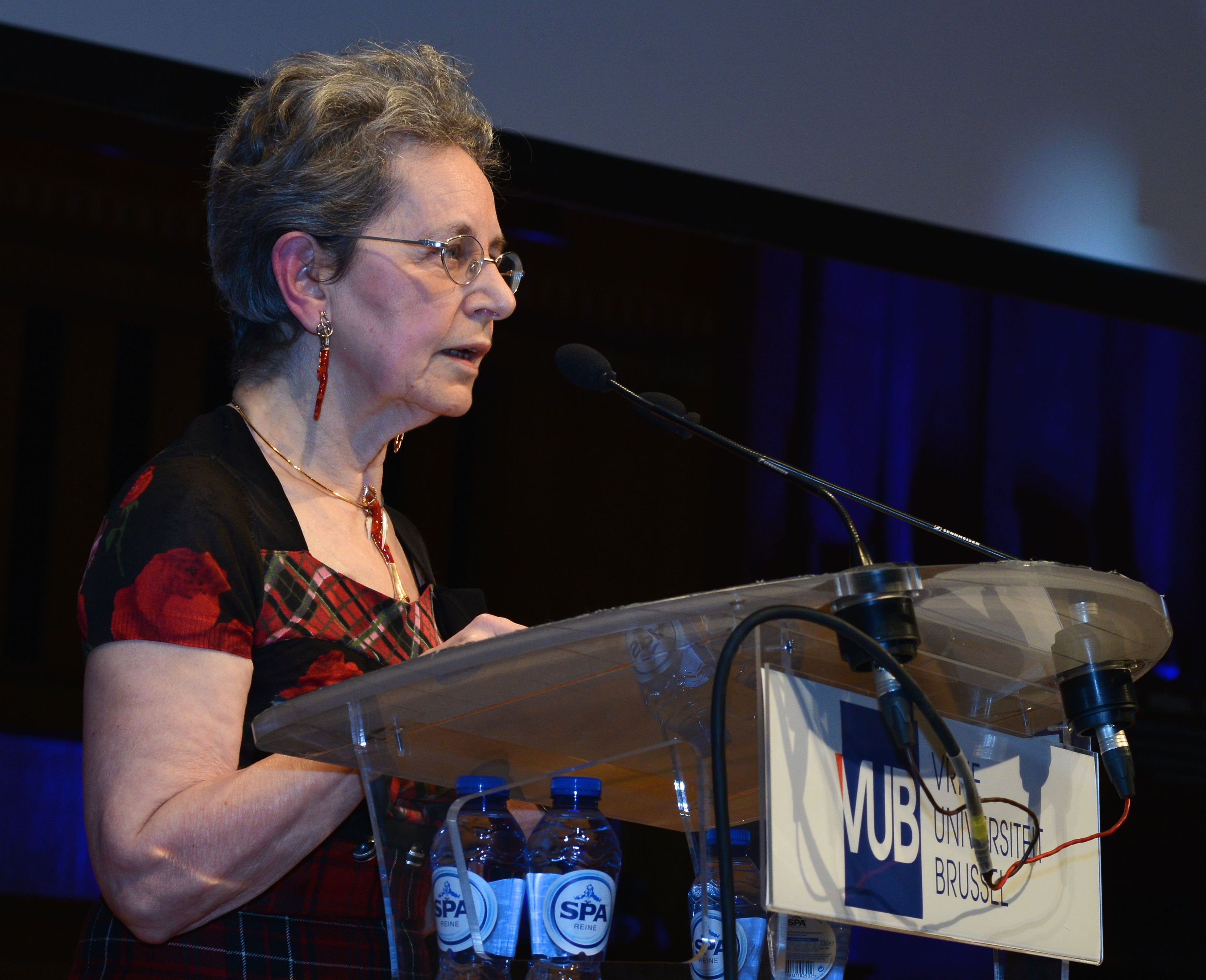 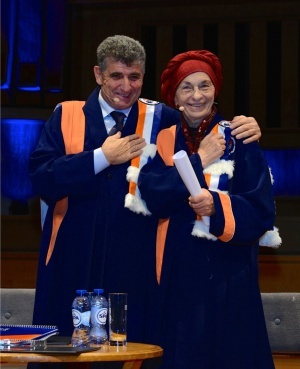 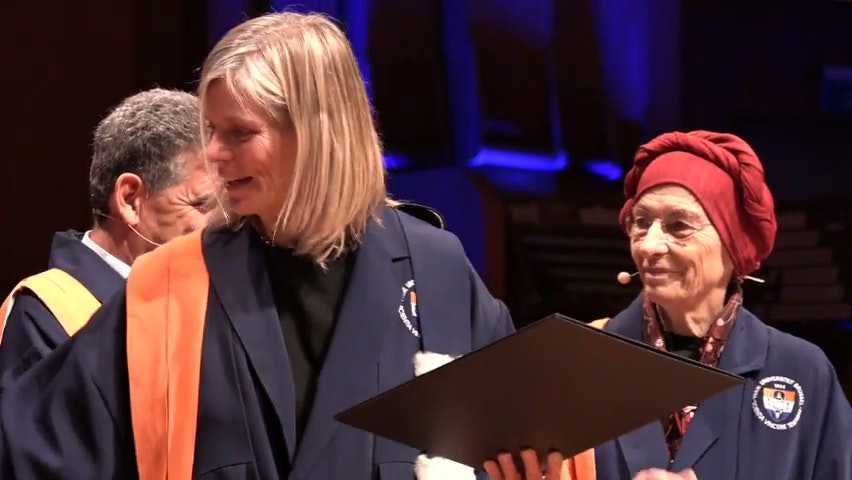 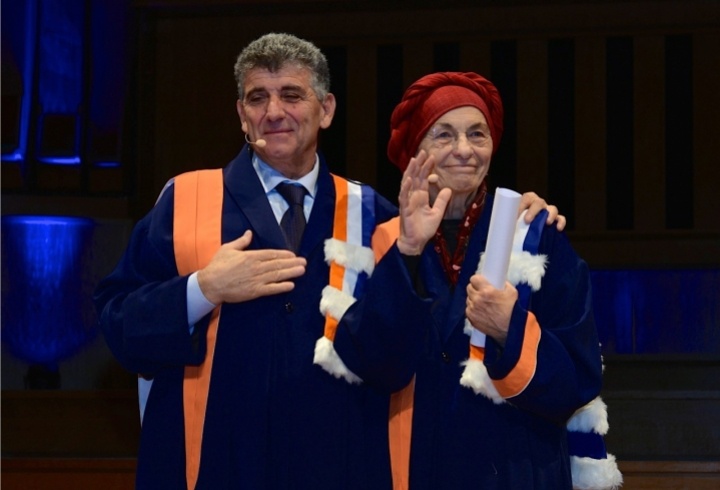 Children of war in the strict sense:

These are children conceived by parents who belong to countries, regions and peoples at war and who would probably not have met without this conflict.
So these children are produced by war.

The children born of the Second World War – sensu strictiori, in the narrower sense –, as experts by experience and based on recent scientific research, today wish to make the following plea and first of all ask you the following question:

What were Romeo and Juliet’s intentions would death not have taken them by mistake? They would have loved each other secretly and begotten children just like in Norma, Bellini’s opera. Their families and friends would have continued to tear each other apart. They would have dropped children in the world.

History scholars, researchers in psychological and social sciences, therapists and physicians still today discover the marks of the First World War. One century is not enough to erase the consequences of conflict. Its offspring know this best: we burden the future with our individual and social traumatisms.

Which fate were the children of Romeo and Juliet and their respective families to suffer? In summary they are regarded as “children of the enemy”. Which are the consequences, which is their fate? – They are accepted by none of the warring parties. Like their mothers, passed off as traitresses and sluts, they are excluded. Pregnant mothers often cannot and should not opt for medically assisted abortion. When they want to keep the child they seldom know where and how to give birth and after childbirth what to do with the child. – The existence and identity of the child is not secured. Where to register it officially and by which name? – Child murder sometimes is the only way out or is committed by third parties. – There are cases of child abduction, not always with so-called well-meant adoption intentions. – Children born of war are often reduced to commodities, as cheap labour and objects of lust or for the purpose of organ trafficking. – Child soldiers and comfort women are not seldom born of war (cf. Littell). – Some of them are deployed as living bombs in terrorist attacks.

The atrocities they have to suffer are hard for us to imagine but research journalists often bring shocking stories about what children are put through. The Report of the Secretary-General for the General Assembly of the Security Council (24 August 2017) about Children and armed conflict reads as a horror story. Due to the increasing number of abductions and forced marriages as well as the obstruction of humanitarian and medical help, sexual violence towards women and children takes unknown proportions. In the Central African Republic the reporter  admits that: “Sexual exploitation and abuse of children by peacekeepers, whether under the command of the United Nations or other international arrangements, continued to be a serious protection concern in the Central African Republic”. But why is this report embargoed?

In general the Report is far from optimistic: “In 2016, there were at least 4,000 verified violations by government forces and more than 11,500 verified violations by the range of nonState armed groups.” (p. 2). In addition it shows the “devastating consequences for children, particularly in their formative stages”, such as the development of aggressivity amongst the children themselves. Estimating the true extent of the problem is very difficult due to the lack of witnesses because the traumatisms due to sexual violence and the social stigmatisation of the victims inhibit spontaneous witnessing.

In all similar reports and analyses concerning violence on children in conflict areas and how their rights are roughshod ridden over, it is however striking that little or no attention is paid to the history of their begetting. For children and births in the present refugee flow this is even more surprising. Although everybody knows that those children and most of the women accompanying them come from conflict zone, little attention is paid to their past history. When contacting Unicef, their reply literally was: “We have no expertise in this domain”.

First aid, care, shelter, food and human attention may be of the utmost importance, providing a basis for a decent life in our societies also has to follow very quickly. Let us not forget that we all too often are overtaken by our history and are then confronted with old ghosts. We therefore cannot enough support the whish from the General Assembly of the UNO, which on the 19th of December 2016 insisted on implementing the Convention on the Rights of the Child and urged states: “to promote and protect the rights of every child to be registered immediately after birth, to receive a birth certificate, to have a name from birth, to acquire a nationality and, as far as possible, to know and be cared for by his or her parents, in particular where the child would otherwise be stateless” and “to respect the right of every child, including migrant children, to preserve his or her identity, including nationality, name and family relations as recognized by law without unlawful interference, and, where a child is illegally deprived of some or all of the elements of his or her identity, to provide appropriate assistance and protection, with a view to re-establishing speedily his or her identity”.

Because we too are concerned that “there are many cases of unaccompanied children going missing every year”, we also want to urge states “to sufficiently investigate all cases of missing unaccompanied children and take all measures necessary to increase their protection, including by, inter alia, enhancing national capacities to identify, register and document new arrivals”1.

Those directives, which must be binding upon all states and which have to be legally enshrined by their parliaments, are extremely important for children born of war such as to recover their identity with official aid and to be protected by a legal system by having a nationality. This is however not sufficient. Their mothers should also be protected and offered security of existence through an international statute. Today women are pregnant because of war conditions such as described here. Some women have had to sexually pay for fleeing conflict in their country and are now pregnant. They have to be given the choice to keep their child and to bring it in the world under good conditions. Or should they so wish, to abort their pregnancy in a medically sound manner.

The UNO can only express wishes. The EU-directives are binding upon its member states. Yesterday’s children born of war urge you to join forces to give today’s and tomorrow’s children born of war an international statute which guarantees their right to an identity as of  their birth, protects them and their mothers from social exclusion and respects their points of view. We, have seldom or never been able to rely on such a statute. Maybe our sisters and brothers children born of war will now be heard. Is it not the best interests of the child, the future of a society, which should always and everywhere take priority?

To conclude, Madam Rector, ladies and gentlemen, we ask you to listen more often, no, to always listen to the voice of the unprejudiced, still unbiased child in you.